Performance > Ether and the Voice: an Electronic Media Opera

Performance Documentation. Ether and the Voice: an Electronic Media Opera

And Now the Dead Shall Speak

an echo of you, a memory slip, static and time a voyeurs last trip. i’m winding myself around an old friend, who’s been dead for years, a voice at the end. we’ve been dead for years, our voices pretend. you’re missing the part that’s mostly you Ether and the Voice is a work of science fiction, an exploration of female voice, technology and identity. Keough creates a world of symbolic and linguistic fantasy, exploring the disembodied voice, electronic manipulation, personal drama and the archetypal and psychological structures of the interior. Ether and the Voice exposes the architecture of the electronically saturated psyche, revealing the complex multifaceted relationship between human experience and technology. 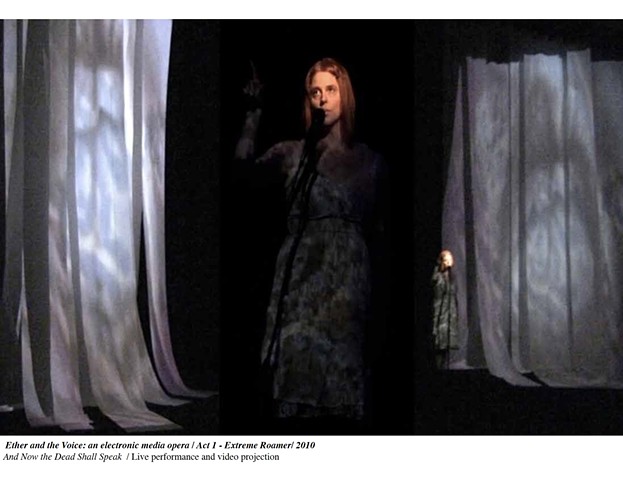 And Now the Dead Shall Speak
Multimedia performance opera
< previous next >