Video > Ether and the Voice an Electronic Media Opera

Ether and the Voice: an electronic media opera is an exploration of female voice, technology and identity. Keough creates a world of symbolic and linguistic fantasy, exploring the disembodied voice, electronic environment, personal drama and the archetypal and psychological structures of the interior.

The narrative explores the phenomena of the disembodied voice and the fragmentation of identity and language through electronic modes of communication and identification. The work investigates older technologies as media devices which initially dislocated the voice from the body such as radio, the telephone and the phonograph, and parallels that phenomena with the splintering and hybridization of virtual identity, digital communication, and language - thus expressing a profile of the posthuman.

The story follows Ether (the main character) through three distinct environments as she journeys to retrieve the voice. These environments are created through large scale video projections, installation, and an original sound and music score. Throughout the opera, Ether encounters archetypal and mythic embodiments of the female voice. Sirens are depicted as shimmering disembodied mouths while the story’s narrators the Dreamer, the Vegan, and the Blonde express their ability to move freely within electronic/digital spaces by shape shifting their identities and placing themselves in alternate environments. Ether and the Voice exposes the architecture of the electronically saturated psyche, revealing the complex multifaceted relationship between human experience and technology. 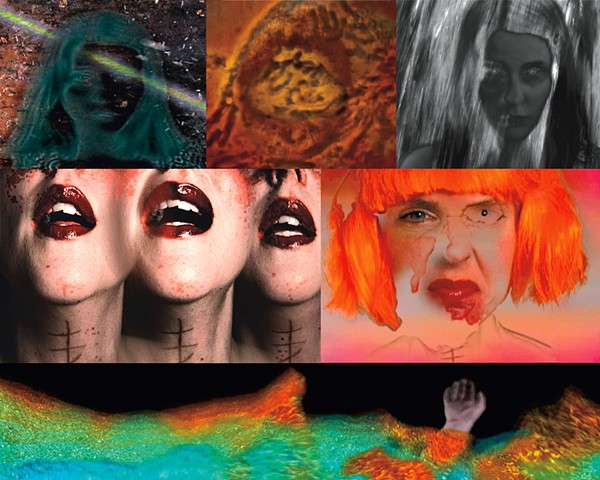 Ether and the Voice: an Electronic Media Opera
next >